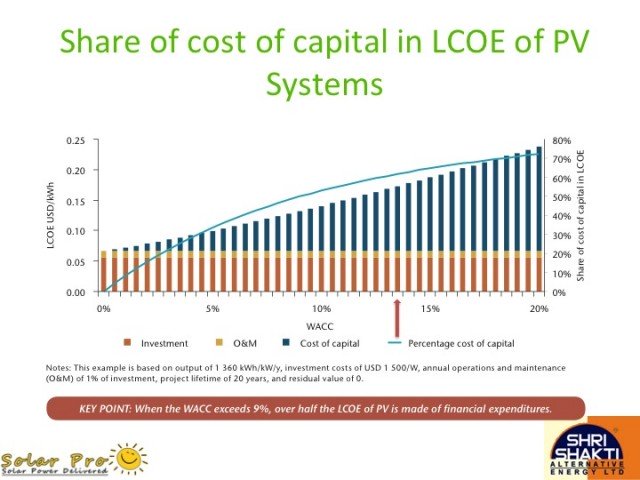 Debt servicing accounts for 50% of the cost of the solar energy when the weighted average cost of capital (WACC) is 9%. This is illustrated in the graph below which is a part of the Solar PV Roadmap 2014, prepared by International Energy Agency (IEA).

In India, with interest rates of 13% and equity reckoned at 16% post tax, the WACC is 13.9 because the debt : equity ratio of 70:30 is standard for power sector. The share of interest cost in the levelized cost of electricity (LCOE) for the Indian situation would be nearly 60%.

Against the above background, the idea of dollar denominated PPAs proposed by Mr Piyush Goyal, Honorable Minister for Power, Coal and Renewable Energy, assumes lot of significance. The detailed mechanism is yet to be formulated but it could be game changer in attracting foreign capital and additional international investors. Potentially cost of solar power may reach parity with new thermal power if forex hedging cost of 3% to 5% can be saved through this mechanism as per an article in The Economic Times dt 07/05/2015 but that would be too optimistic. Indian Banks have overexposure to power sector, so raising money from overseas is important to fund the growth of solar power sector.Several Indian Banks and FIs have been asked to raise Green Bonds but these would not drive down the borrowing rates by as much as 3% to 5%.

Many solar power developers have already accessed foreign debt for financing their projects in India and are able to bid more competitively in the tenders for allocation of solar projects. If Indian Banks and FIs cannot significantly lower the interest cost, they could at least increase the debt:equity ratio from the present 70:30 to something like 80:20 which can also enable in reducing the tariff rates for the same return on equity.