Rising Sun 3.0 - Disruption on the Horizon, Report by KPMG India 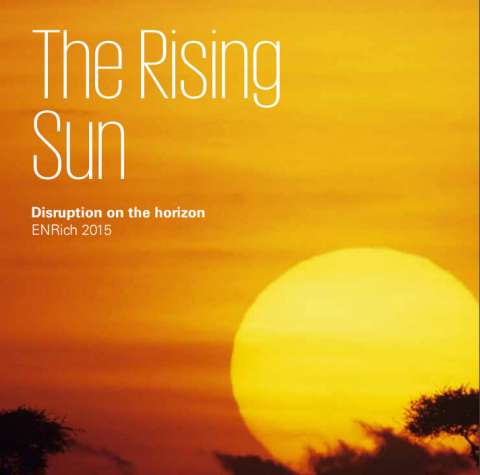 KPMG has released its third report on Indian Solar market in November 2015. The last one year has been truly tumultuous for solar in India with exponential growth in the market and multifold increase in targets. The timing of the release of the report is good as the dust has settled down after the policy and target announcements by the new government. By now, the targets have been accepted more widely and there are fewer 'nay sayers' and more and more companies, both indian and foreign, are getting down to business and have commenced implementing their projects or business plans.

KPMG are saying that 'Solar is among 'exponential technologies' – meaning their advent would be faster than we anticipated and could cause disruption if preparation for them is not adequate'. The Indian market with over 30% of the load and energy consumption being accounted by agriculture is unique. Also, the utility markets are still being built and there is immense scope of myriad applications of solar unlike markets where utilities are more matured. That leaves a lot of scope of innovation and thereby disruption.

The Third Industrial Revolution (TIR) is all about Internet of Things, Smart Grids, Electric Vehicles, Solar Energy, Energy Efficiency and Hydrogen Economy. TIR is an opportunity to create an "energy internet" a smart, responsive, decentralized network of energy and information. Such a network would be based on multi-directional flows of renewable energy, supported by the digital revolution and the rise of big data.

KPMG is right about Disruption on the Horizon for sure.